Why you will love this comfort food recipe:

How do you stuff manicotti shells?

This recipe allows for easy stuffing of the shells because the cheese and spinach mixture is cold. When it is cold, the ricotta balls up more nicely and is easy to insert into the noodle.

Ricotta isn't a cheese everyone always has on hand. Common substitutes are:

Can manicotti be made ahead of time?

There are three ways manicotti can be made ahead of time

Cook noodles and let noodles cool and store in the fridge.

It can be hard to touch the noodles to stuff them when they are hot anyway, so if you did not have a lot of time in the evening to wait for the water to boil, you can cook the noodles on a different day.

As long as you have a sealable container you bake cheese manicotti in, you can just put it in the fridge and take out and eat later.

Make and freeze and eat later

You can freeze this recipe. Just make sure to let thaw in the fridge and then at room temperature for at least 15 minutes before heating up in the oven.

How to store the best manicotti: 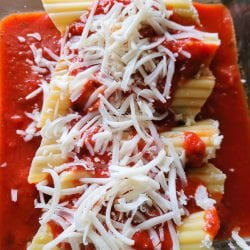