Birria tacos are the best kind of tacos! This recipe is a lot easier than most birria recipes as it does not have dried peppers in it, and can be made with meat that is already cooked. This is more of a quesabirria recipe as the tortillas are fried with the birria taco dipping sauce, but then they are also fried with cheese on top. This makes the taco easier to dip in the sauce when there is no cheese falling out of the top.

What do birria tacos taste like? They taste like the best variation of taco you'll ever have! Most recipes similar to this one have over 20 ingredients, but this recipe is short and simple with only 7 ingredients.

Check out my other Mexican recipes

How is birria made?

Birria tacos without guajilo are a lot simpler to make than trying to make them with dried peppers. With using canned chipotle peppers, there is no need to try and rehydrate them. Just slow cook the meat of your choice, add sauce ingredients to the sauce pan, boil sauce, add meat, and prepare your tortillas! You can use fresh chipotles too, just make sure you make adobo sauce to go with it.

How to store quesabirria tacos?

I recommend storing the meat/dipping sauce part by itself, then assembling with the tortillas when you are ready to eat the leftovers.

freezer-I have not tried freezing this Mexican recipe. If you would like to try it, go for it! Let me know how it goes. 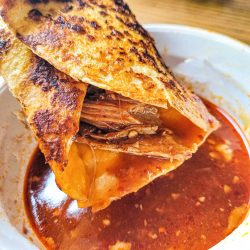 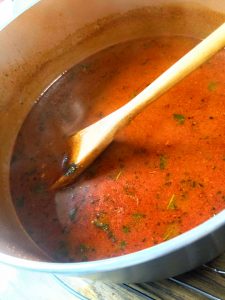